Marco Montali is a renowned scholar whose area of research spans across logics in artificial intelligence and process analytics, with a special focus on declarative approaches to modelling. In this issue of the newsletter, we have a pleasant chat with Marco about the mutual benefits that can stem from the cross-fertilization of those fields.

Tell us a bit about yourself, Marco. How did it all start? 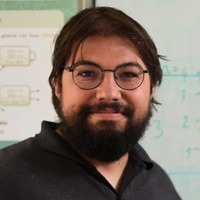 Since my early years at the university, I knew I was fascinated by artificial intelligence although, frankly, I had no clear idea what it actually was. My first contact with Artificial Intelligence and processes occurred during my Bachelor thesis on interaction protocols. That is, state charts. Processes, in other words!

Right when I was about to get my degree, my daughter Giulia was born. I had to find a way to make ends meet! After my first contract as a tutor, a scholarship became available with Paola Mello (my advisor) on conformance checking for multi-agents protocols. Well, compliance checking, actually. You know, the concepts are not so far from one another, and, even more at that time, the boundary was quite blurry. In essence: given a normative behavioural model and some execution traces thereof, we wanted to check whether something had gone against the norms there, and what went wrong, in case.

My Master thesis came up as a work at the edge of clinical guidelines and conformance checking. Fun fact is, we had barely acquired any prior knowledge on process modelling back then. During that time, I started regularly browsing the publications page of Wil van der Aalst’s website. Let’s say, it was a weekly polling – as approximately every week a new paper popped up in the list at the end of that single HTML page. Pretty impressive!

Equipped with this background, we invented a new language for the guidelines. Look at Table 1: what does it recall? Yes: we came up with a minimal subset of workflow patterns. So, we reinvented the wheel, we could say. Just, homemade. Like here. Soon after, I began my PhD adventure. We published a paper on clinical guidelines. They were named Computer-Interpretable Guidelines (CIG). Look at Equation 1: don’t they just look like what is nowadays called multi-perspective Declare?

Right… Well, next to Declare, ConDec and its earlier service-oriented version DecSerFlow, Wil and colleagues published a paper in which a language named CIG-Dec was presented! All in all, we were doing Process Mining when it was not so very mainstream yet. Truth be told, we were doing process mining research but for a couple of years we did had not even realised it. And in 2007, we had our first paper on what would have become known as Declare mining.

We were using a language to specify processes that, in the end, should have been modelled with BPMN or Petri nets or other languages alike. However, in the back of our head, we perceived that a declarative specification language could have been a great means for modelling on its own. So we stopped translating procedural diagrams into our language but rather focussed on the language itself for flexible processes.

Soon after, my advisor Paola told me: “We are studying so many papers from the BPM community. Why not sending a paper and catch up with them?” Hence our WS-FM paper. Remember that as a weekly habit I was accustomed to read Wil’s page to find a brand new paper? Well, one week before leaving, the paper on DecSerFlow was there. It was a keynote paper, thus with ample margins for an extensive set of descriptions and patterns. That was so close to what we were doing! With Sergio Storari, we took that paper and translated all the constraints in that paper overnight. Equipped with our enthusiasm, we talked with Wil during the very first coffee break and showed him our translation. We explained we could do so much with our technique! Only a sincere need for coffee interrupted our meeting.

And that was the new beginning!

We got that by combining the logic side of AI (knowledge representation and the like, to be more specific) and process analytics, we could do so much for both worlds… We could take techniques in AI and study them in a more controlled environment like that of an organisation. At the same time, though, we had the opportunity to fly from business process executions back to the abstract world of classic artificial intelligence. Our work on linear temporal logics on finite traces with Giuseppe De Giacomo started from the discussions about the world of process analysis.

When I completed my PhD, I realised the thesis covered a rather wide set of topics. I had results on declarative process mining, conformance checking, compliance checking with data, and more. An intense exchange of results bouncing from AI to process mining and vice versa. As my thesis was between the two worlds, Wil and Robert Kowalski (one of the inventors of logic programming!) read the thesis. Their reviews are public! You can read them on my CV (page 17).

In 2010, I won a scholarship for visiting researchers at the Eindhoven University of Technology. I came to know Fabrizio Maggi and Michael Westergaard there and we began working on temporal logics for process monitoring! During my post-doc, I realised it might have been the case to have a look around. And I came to know Diego Calvanese from Bolzano. I held a talk there when Diego was looking for researchers to work in the ACSI (Artifact-Centric Service Interoperation) European project. We had a common interest in AI for data and control flows. Our expertise was fairly complementary, though, which we particularly liked. So, here we go. I was in Bolzano! Works on the automated verification of processes and data, linear temporal logics on finite traces… It all began with ACSI, in fact. Later on, we would have started transferring the knowledge in the declarative area back to the procedural world of Petri nets.

Starting with the passion for AI, you continued towards process analytics but still with a foot in the door of the artificial intelligence world.

We had a stream of work, and targeted the community that was most suitable for the topic according to the perspective we were looking from at the moment – let it be process mining, BPM, formal reasoning –, so that the reference community could critically assess our contribution. To really understand how things happen, we need to draw from different wells. Sure, it is not easy because the experts may find a reason to reject your paper from multiple perspectives. In the long run, though, it is rewarding because it is lots of fun and you get acquainted with a big deal of advanced concepts.

What is the opportunity here? Take the problem of processes and data. It can be seen as a formal-theoretical problem to be analysed in depth. There are remarkable works that do so like those of Alin Deutsch and Victor Vianu. Not to mention Giuseppe De Giacomo and Diego Calvanese. There, you push the boundaries of tractability and decidability. BPM and process mining offer a playground to see when and whether those abstract notions apply, or how to concretely employ them for something of use in the real world.

Process mining as a playground! For example…?

For example, we studied the abstract notion of “state boundedness” to achieve various key results on the verification of processes and data. In a Petri net, state unboundedness would entail that unboundedly many cases are generated in a time unit. In real-life processes, though, this is not usually happening. Why? Because there are resources, which require to spread new cases over time. We could synergically combine techniques and results from different communities to get new insights into the problem! Actually, we applied this approach based on the cross-fertilization of fields also in a new research line focused on the usage of semantic technologies for data preparation in process mining.

Speaking of usefulness: nowadays, it seems that so many of us are running after usefulness. Hey! We are researchers, right? We should do things that are new and fun. If they are useful, history will tell. Understanding is orthogonal to utility. What seems currently useless might become fundamental in a few years. To really appreciate the depth of research, we may need to fly high. At times, we may have to investigate fields that appear to be disconnected but in the end, could help out with the very problem we were focussing on. Let’s take another example: process mining is not model-less. Investigating Object-Centric Behavioural Constraints, Declare and probability, Data Petri nets and so on appears to be work on modelling, thus off-topic for mining, right? Not really: to understand what our brand new technique can discover we may want to reason on what the characteristics of a discoverable model are.