The IEEE Task Force on Process Mining aims to promote the topic of process mining. In the context of this task force, a group of more than 75 people involving more than 50 organizations created the Process Mining Manifesto. By defining a set of guiding principles and listing important challenges, this manifesto hopes to serve as a guide for software developers, scientists, consultants, business managers, and end-users. The goal is to increase the maturity of process mining as a new tool to improve the (re)design, control, and support of operational business processes. 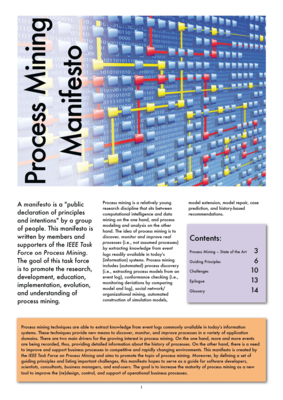 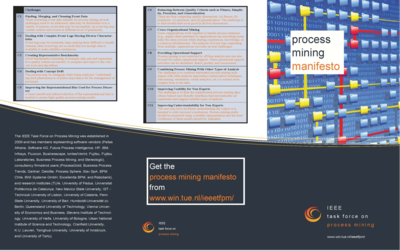 Manifesto in other languages

(C) 2012 The Author(s). The Process Mining Manifesto by the IEEE Task Force on Process Mining was originally published in F. Daniel, K. Barkaoui, S. Dustdar (Eds.): BPM 2011 Workshops, Part I, LNBIP 99, Springer-Verlag, pp. 169–194, 2012 (ISBN 978-3-642-28107-5). The document is published and distributed under the terms of the Creative Commons Attribution Non-commercial License which permits any noncommercial use, distribution, and reproduction in any medium, provided the original authors and source are listed.